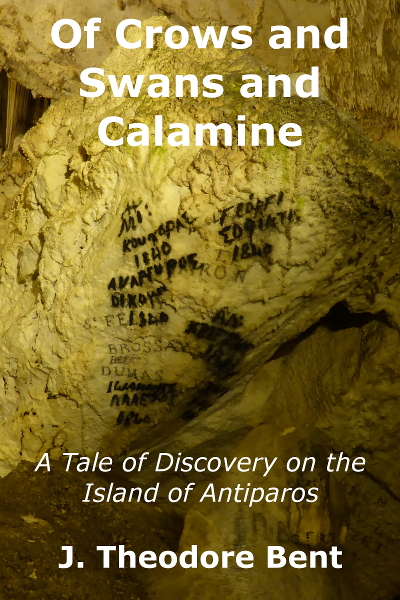 During the winters between 1882/3 and 1883/4, the intrepid explorers Theodore and Mabel Bent left their home and opulent lifestyle in London’s fashionable West End to meander around the Greek islands in search of adventure in the exotic Levant.

British Museum
Browse some of the objects excavated by Theodore which are currently held in the British Museum
In December 1883 and February 1884, the couple visited Antiparos to excavate ancient grave sites on the island. Their excavations yielded numerous finds which established Theodore’s credentials as an archaeologist; many of those finds are now in the British Museum. This ebook is a digitised extract from Theodore’s book ‘The Cyclades or Life Among the Insular Greeks’. in which he recounts details of his adventures and the excavations he undertook on the island. The full book may be read online or downloaded for free on the website http://the-cyclades.click.

In his writings,  Theodore omitted to disclose the precise location of his two excavation sites on Antiparos. In 1898 the Greek archaeologist Christos Tsountas located a site which he attributed to Theodore’s initial site at a place he named as Krassades, but knowledge of exactly where Krassades lay was lost over the ensuing years.

For well over a century, the location of Theodore’s site remained a mystery. But the answer had always been there, hidden away in the lines of Theodore’s book and Mabel’s chronicles, ready to be revealed in conjunction with a little local research. Read the blog post, Of Crows and Swans and Calamine, on our sister website, describing how Theodore’s excavation site was recently located using just the writings of Theodore and Mabel.

In Greek Waters – During his excavations, Theodore took a day off to go fishing. Read this free ebook of his entertaining account of the day, his description of some unconventional fishing techniques and the experiences of his boatman when kidnapped by pirates.
Printed Books

The Cyclades or Life Among the Insular Greeks – Theodore’s classic book of his and Mabel’s adventures in the Cyclades can be obtained in print. This print version, edited by Gerald Brisch, also contains additional information about the Bents and their travel itinerary.

World Enough, and Time: The Travel Chronicles of Mrs J Theodore Bent Volume I: Greece and the Levantine Littoral – You can read more about Theodore’s and Mabel’s visit to Antiparos in the informal, day-by-day diary entries Mabel made in her chronicles.

You can learn more about the Bents on the official Bent Archive website tambent.com. The website also contains details of their books and writings.