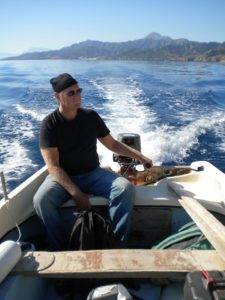 Roger Jinkinson was born in Salisbury, England, but lived for many years in London. An unusual career path found him meandering from school caretaker to deputy vice chancellor of a large university, then, at the age of fifty he gave it all up to go fishing and keep bees. Now he spends half his time in Diafani, a remote village on the Greek island of Karpathos, lured by the hunters, gatherers, fishermen and farmers who fascinated him so much. He writes, takes photographs and dives to spear fish but no longer keeps bees.

Roger’s experiences in Diafani sowed the seeds for three successful books. Tales from a Greek Island.  a series of short stories about village life. American Ikaros,  the biography of Kevin Andrews, the American writer who came to the village in the 1960’s. More Tales from a Greek Island, a further collection of essays and stories bringing to life a way of existence unknown to modern city dwellers.

Tales from Laos, the stories Roger has shared on this website, stem from the time he spends in another location which arouses his passions. He puts to work his incisive insight to paint a picture of the culture and day-to-day life of a far-off land.

Roger’s three books are available in paperback and ebook editions from Amazon UK and from Amazon.com – just click on the links below.