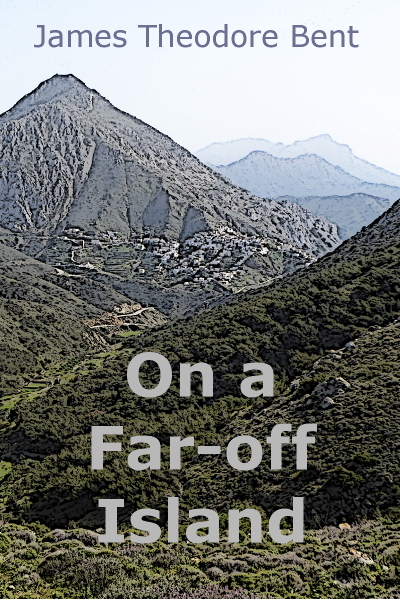 At the beginning of March 1885, the couple visited Karpathos and stayed until April 22. In an adventure-packed stay, after almost being shipwrecked, they travelled throughout the island, befriended the Turkish governor, became involved in a murder plot and joined in the traditional Easter celebrations in the mountains of the north of the island.

‘On a Far-off Island‘ describes their visit and presents a unique record of Karpathiote life, customs and beliefs, undocumented by any other travellers at that time.

This ebook is a digitised edition of the article Theodore wrote about Karpathos, ‘On a far-off Island’, for the February 1886 edition of Blackwood’s Magazine.

In his account, Theodore was vague about the identity of some of the islanders he met. The philologist and historian Minas Chouvardas, who was born on Karpathos, has produced a meticulously-researched article delving further into the people and events Theodore wrote about. Minas’ article can be read on our sister website at  http://tambent.com/2021/01/04/on-a-far-off-island/. The website is the authoritative source of information about the lives, travels and researches of Theodore and Mabel Bent.

Theodore wrote about their adventures in the islands of the Cyclades in his best-selling book ‘The Cyclades or Life Among the Insular Greeks’. A free ebook version can be read online or downloaded at http://the-cyclades.click.

The Cyclades or Life Among the Insular Greeks – Theodore’s classic book of his and Mabel’s adventures in the Cyclades can be obtained in print. This print version, edited by Gerald Brisch, also contains additional information about the Bents and their travel itinerary.

World Enough, and Time: The Travel Chronicles of Mrs J Theodore Bent Volume I: Greece and the Levantine Littoral – You can read more about Theodore’s and Mabel’s adventures in the informal, day-by-day diary entries Mabel made in her chronicles.

You can learn more about the Bents on the official Bent Archive website tambent.com. The website also contains details of their books and writings.