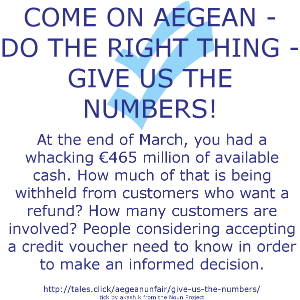 *** What is t stop them from. in the high season, cancelling a flight, offering only credit vouchers, and rescheduling a new flight, ecomicall fisnced by new bookings, thereby ensuring extension of the forced loan for pre-bookers.

Customers who are faced with the decision over whether to accept Aegean’s 18-month credit voucher, among other personal considerations, need to consider the ability of the airline to survive long enough for them to take advantage of the voucher.

In a financial announcement on May 19, Aegean announced available cash of €465 million. It also stated that it had arranged loans from Greek banks totalling €120 million.

As a result of the suspension of activites on March 26 it predicted almost zero activity for April, May and June and expected a burn rate of €40 million for each of those months – a total of €120 million.

Without knowing the schedule for the draw-down of the cash from the bank loans, we might assume that the €120 million loan was to cover costs for April, May and June, which would leave them still with available cash of €465 million at the end of June.

I’m no airline eecutive but but I can do basic maths. Why not increase the loan to cover bookins on flights that didn’t go in those 3 months and offer attractive vouchers or rebookings – relatively . Eiter way, it would have been positine income, either by reducing the debt to passengers who’d booked and paid for April-June or by new income from fresh bookings. OK, they’d have nad to negotiate a maxium loan amount but I’m sure Aegean could have negotiated it on the basis that only the amount drwa down cost them money. What they’ve suceeded in doing is alientaing a mass of previously, amazingly loyal customers who will never ue them again. Either by the extened flexible draw-down or by withholing customer’s money – the debt would have remained the same – although ess because Aegean would not have ost the business from this year from disenchanted customers, and, possibly more important;y, could have relied on thos loyal customers to help them climb into profit next year and repy the banl loans. The chose the apparently easy optin – steal their customers money – just because they had it in teir hands and they could. short-sighted managment policy which could ultiately lead to their collapse.

Maybe the deciding factor was the banks would have pushed for a tougher deal, possibly affecting the personal finances of the fat cats at Aegean. With the aid of the immoral Greek governemnt it was easier to steal the money from customers. If, inthe end, it didn’t work, and Aegean collapsed, so what – the fat cats wouldn’t personally lose – only ‘oi polloi’ – we, the customers! After all, the banks would surely have negotiated priority creditor status in the evnt of collapse, and, of course, they knew that Aegean was sitting on a cash pile of customers’ from which they would have first grabs. Was the cusotmers’ share f the 465 million the security for the grant of the 120 million loan from the GReek banks?

So, I’m not saying that’s what drove the decision, who knows, but, in the absence of any clarification or detailed figures from Aegeam, I can find not other rationale for Aegean adopting a polciy which any fool could see would lead to a massive heamhorrage of loyal customers, provding a short-term cure but ultinately leading to the slow death of the patient.

Once you accept a voucher, you are on a one-way street – there’s no going back.

The earlier after June that you intend to fly, the greater the chance of Aegean still being in operation, conversely, the later, the more at risk is your voucher.

The flights which have been cancelled